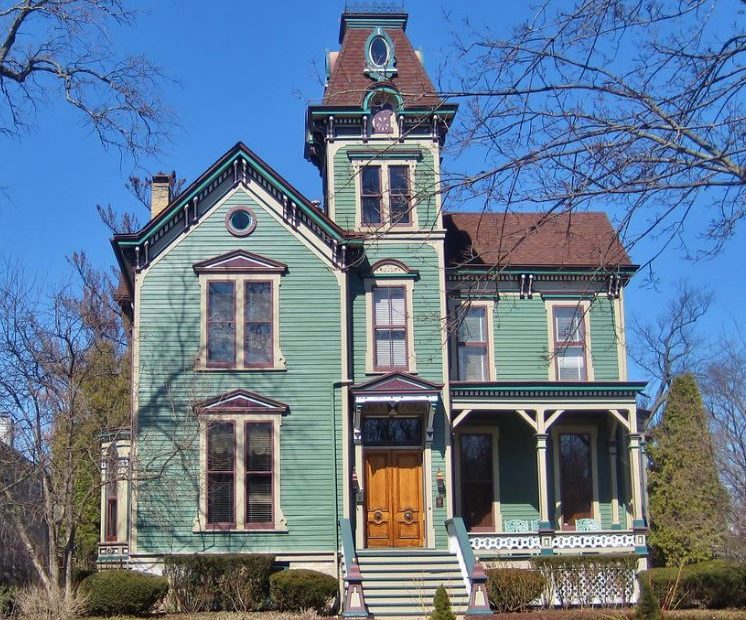 What is Second Empire?

Second empire is some of the most iconic in American historical architecture. Influenced by Second Empire France, Paris architecture, and Baroque revival; this is a style most seen at the turn of the century from 1850-1900. This style  is very prominent in the USA and Canada, as it is at a time when people were colonizing the Americas.

This beautiful property is a prime example of Second Empire architecture. The characteristics shining out in this property. The boxy shape of the building and  central tower are all direct giveaways of the time period this house was built.

Personally, I love the color of this building, even now, it’s light, bright colors exude a playfulness and delicacy that other building styles do not have. It also boasts a large oak door which is a very impressive statement piece.

A beautiful red brick house in Albion, NY. This is a great example of second empire Baroque, when mixed with other styles. It boasts an impressive drawing room, and has classic interior elements as well as the facade. As well as impressive peaked roofs, it also has slate tiles which is also classic to the style. This is a perfect inner city home. Cute but also a statement.

Just look at the symmetry of this historical home. This house does not boast towers or different levels, but it still retains an element of charm and grandeur that homes these days would find hard to beat.

The classic porch leaves a great place to sit and think on a hot summer day, and the iron guttering and detail is, once again, classic to this architectural style. If you have second empire home plans, you may want to look at this house as a prime example of what styles and trends to follow.

A more grand example of this architecture. Almost verging on colonial, this impressive home boasts three stories and has impressive grand interiors. Boasting a Second Empire mansard roof with slate tiles. Once again, a beautiful example, and the arched windows evoke a break from the boxy, linear pattern.

This is one of the oldest examples of this style, and that is evident as it is slightly more plain, and potentially even Georgian looking than some of the other designs that would crop up in the next 70 years.

Another example in this particular historical district is these set of buildings, now converted into flats, this is a beautiful example of the scale of these homes, and the size.

They do make perfect apartment building, because there are plenty of storeys and windows to get the natural light in at all angles. This has a more English looking Victorian terraced feel to it, but still has all the characteristics of the french style.

This Victorian Second Empire house casts a formidable shadow. You can see why people often say this style of home is haunted – there is something about the way these homes tower over you that makes them kind of …spooky. This home has beautiful duck egg blue accents along the windows which juxtaposes with the red window frames.

This is very similar to a home we renovated in 2018/19. It was a huge undertaking, but hugely rewarding. Read about it here!

This house is an explosion of color (even on this dull day) it overlooks the Cape Cod national seashore and boasts a watch tower that one could even say looked like a lighthouse. The beautiful pointed roofs and columns make this design very iconic and have a lot of stature, despite only being predominantly two stories high. Captain Edward Penniman made his fortune from Whaling and upon retiring age 37, built this house.

I think it is quite cute looking! For more info, click here!

Boasting a watchtower with circular windows, this gives a 360 degree panoramic view. This is a very large grand house and has 5 storeys including the basement. It also has the rounded arched windows and all of the main design features you would expect from a property in this Baroque style. A Classic Mansard roof to boot.

You may notice the locations of these houses are all beginning to match up. This is no coincidence, this was a style more predominantly in the midwest and northeast. The style of housing is rarely seen in the south, as it was generally only a style afforded by wealthier people living in the suburbs of cities with high flying jobs. Beautiful and colourful, this is another exquisite example of the style.

Notice the flared edges on the roof. This cornice is bracketed on to the roof, and gives it a flared effect. We love it!

Finally, we have this jaw dropping property, perhaps my favorite of this list. The Mansard roof towering over the neighborhood, this is not a property you will forget in a hurry! It lacks the curved windows like a lot of the other houses have, but still has all of the other features. The ornate slate roof, and turret like towers. This house boasts 31 rooms with 14 foot high ceilings. One can imagine the interior is just as impressive as the exterior!

We hope you liked our top 10. I’m sure there are hundreds of others we missed off. Let us know your favourites!